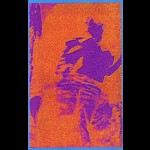 Two cassettes which were the historic first releases by Acid Mothers Temple & The Melting Paraiso U.F.O. They could be looked upon as a prototype for the debut PSF album. Includes their earliest recordings from 1995, the year the group was formed.