Ever-mutating, ever-evolving and inspiring over the decades additional bands have formed carrying the Acid Mothers Temple name from Acid Mothers Gong to AMT & The Space Paranoid and many other manifestations but the enduring, Acid Mothers Temple & The Melting Paraiso U.F.O., has continued to function as the mothership.

Their 24-year odyssey has spawned a discography of over one hundred releases and seen the UFO ‘Underground Freak Out’ circle the globe a few dozen times blowing marbles across thousands of shows. If you don’t believe us check out their insane tour schedules and reviews of their shows.

In 2017 they visited Australian shores for a fleeting moment as guests of Supersense – festival of the ecstatic, but reports of these psychedelic sonic wizards continued to reverberate generating two new Australian festival invitations for 2019.

Contrary brings the legendary Japanese band to Australia this March for Golden Plains, RCC Fringe Adelaide and their very own headline shows in Melbourne & Perth. 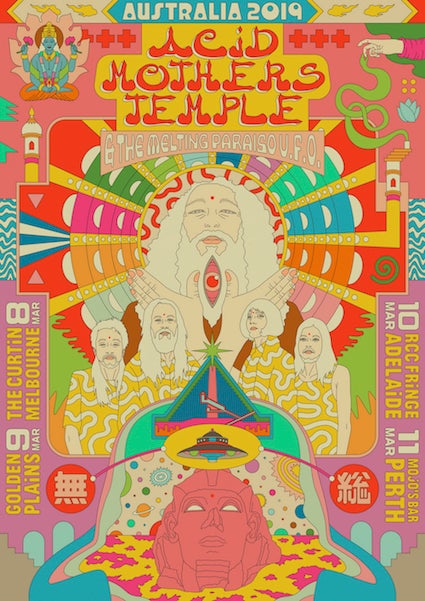