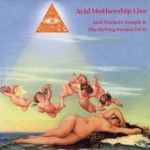 Acid Mothers Temple & The Melting Paraiso U.F.O. – at the time of this live recording were :

This is a digitally remastered version of the “Acid Mothership” cdr (AMCD-023) produced towards the end of the 2007 European tour.