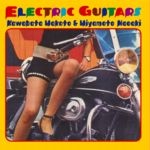 Massive guitar duo from Kawabata and Miyamoto (ex.MNS), who’s been garnering a lot of attention as a noise guitarist for the new century.