Grain – a compilation of 99 short tracks 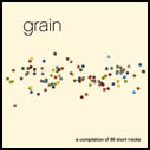 Kawabata has record his “amping solo” only 2 times for his musical activitees since 1978. The first time was 1978, the second time was 2002. The amping is the one of his early musical idea.

Over a year in the making, “Grain” is now completed and ready for release. And what a release it is! Featuring musicians and sound artists from around the globe – Japan, Germany, Austria, USA, UK, Denmark etc… Ranging from noise blow-outs to free-improv sketches to electronic meditations to spoken word to electro-acoustic miniatures to perfectly formed post-rock nuggets, it covers the vast spectrum of inventive and experimental sound. The shortest track is 1 second long, longest track is 2 minutes.