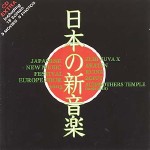 In 1997 and 1999, a set of performances by 3 musicians (Yoshida Tatsuya, Sasaki Hisashi, Tsuyama Atsushi) around a storm of frenzy and shriek in Europe… and they will be back with even greater power. This time Kawabata Makoto from Acid Mothers Temple joins, and 4 musicians form 5 units. A cappella, cosmic free form, progressive core, troubadour, cosmic psychedelic… you’ll be experiencing the essence of all kinds of extremes in the current new music scene in Japan on a single night. Never miss it!

To quest for the vector of “voice”, Yoshida formed this a cappella trio in 1995. It covers from Gregorian chant to ethnic music, to do-wap to hardcore screeming, heavily using irregular rhythms and polyrhythm. All sorts of ideas and aberrant musicality overturn the image of a cappella. Pushing the verge of possiblity of the humnan voice, their totally meaningless lyrics and desperate performances throw the audience into the abyss of the laughter and admiration. it makes the concept of “singing ability” nonsence. “X” is the limited special unit of Zubi Zuva for the tour.

Formed by Tsuyama and Yoshida in 1995 with the motto of “irresponsibleness” and “perfunctoriness”. They easily free themselves from the spell of the traditional seriousness of the art. Using dialy commodities like scissors, toothbrush, zipper, camera and plastic bottle as percussions, and shouting their brand names over and over as the “song”, the show is performed under the concept of low cost and maximum sound effect. They simulate the wild bird songs and sumo live broadcasting; manpowered sampling, so to speak. Akaten is the experimental convenience store punk band that provides the sound images of cheap and simple dialy lives.

Formed in 1985, Ruins has still been continuing to develop and deepen their world for over 18 years, reigning as the pioneer of Drum Bass duo. Tunes are complicated and mysterious, and songs are sung in the language of their own invention. It’s high-tension, wild, heavy, speedy, acute, and powerful tremendous ensemble never sounds like they are only two players. Ruins started with the noisy hardcore sound, then moved into very technical, complicated sound, and now it shows high-quality performances with both characeristics. True hardcore progressive sound.

Formed by Tsuyama and Kawabata in 1998. Zoffy’s music hints both at the members’ deep musical knowledge via their improvised performances of troubadour music and European trad, and also at their deep love for rock via their destructivist covers of classical rock songs, that no longer sounds like anything but Zoffy. The group believes that humor is essential in music, and they unprecedented performances stray far from the beaten track. Is this the Ultima Thule that rock music has long been aiming for? It’s a must if you are interested in the musical backgrounds of the two that are never shown in AMT.

Formed by Kawabata in 1996. Beaming down from their mothership in the Acid Mothers Temple Soul Collective, Acid Mothers Temple & The Melting Paraiso U.F.O. have rapidly become acclaimed as the greatest, most extreme trippsychedelic group in the world. Releases have appeared on label around the world at an amazing pace, and the magnificence of their live performances is already being whispered of as legendary. On this tour, original AMT members Kawabata and Tsuyama join together with Ruins to make up a unique unit, subtitled “mode HHH (Heretical Heritage Heros)”, and playing glittering cosmic freakout music!