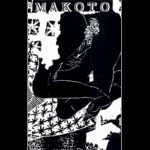 This private cassette, in an edition of 20, consists of a recording of Kawabata’s first overseas solo gig, in Belgium in 1996. It is one of the very few recordings to capture Kawabata’s explosive solo guitar style from before he developed his drone playing. The second side includes a jam session with local jazz drummer called Willy.