Minstrel In The Galaxy 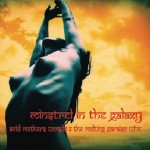 Acid Mothers Temple & The Melting Paraiso U.F.O.
– at the time of this recording were :