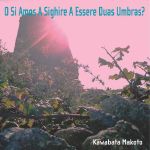 The music on this album was entirely improvised on a single guitar which was divided into three separate systems and connected to three reverb units and one delay unit.