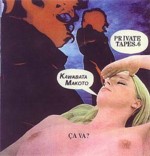 I came up with the idea for this track, consisting just of me touching a resistor, when I appeared at Yamazaki Maso’s (Masonna/Space Machine) “Cosmic Electronic Music Festival”. The playing technique is as per the naming, with a little added echo. On this track I use a Voltage Controlled Filter made by Oberheim Electronics Inc.

This track was recorded in 1994 for my as yet unreleased first solo album. So far only one other track from these sessions has been released – “Bahai Darmha”, which appeared on a free CD that came with the French magazine Abus Dangereux. There’s something about this track that reminds me of Toho Sara, but it also feels very old to me now.