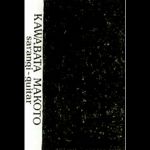 This cassette (in an edition of 40) was sold at Kawabata’s first overseas gig, which took place in Belgium during the 1996 Musica Transonic European tour. It was recorded on a four-track in the communal kitchen of the place they were staying at in Leuven. These are the first recordings of Kawabata’s sarangi solo playing and also his guitar bowing technique.