Son Of A Bitches Brew 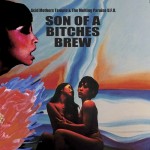 side-A
1. Son of a Bitches Brew

No computers or hard disk recorders were used in the playing, recording or mixing of this album.