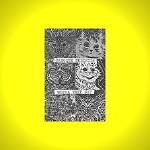 “Our first release with a normal instrumental line-up (guitar, bass, keyboards, drums, ect…). However, since we still had no way of knowings musical theory or how to play our instruments in a normal way, we played in a style completly of our own. We played our 1st live gig around this time. We plugged straight into the amps that had been provided and proceeded to improvise at maximum volume for just under an hour. Finally the amps caught fire and the other bands were unable to play; needless to say that our reception from the audience and promoter was not the most favorable !”
M. Kawabata